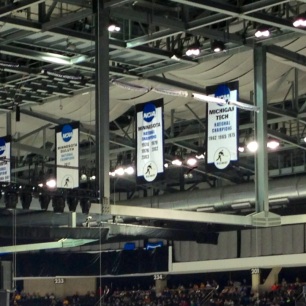 Newest Bleacher Report Article on the Penguins. Check it out!

Check out my newest Bleacher Report article on the crazy Pens vs. Flyers series. It was featured on the Pens page of B/R last night (see below pic and link)! 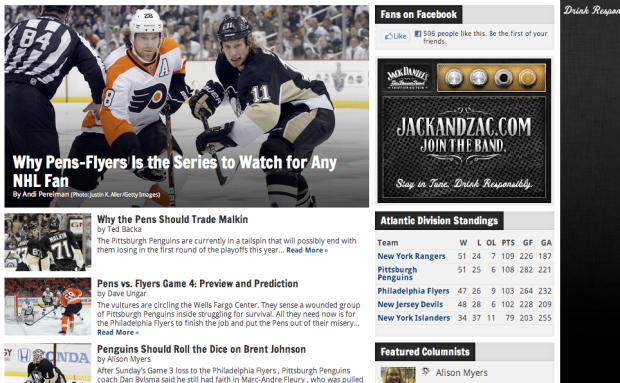 It was really great to write about the Penguins. I am headed to the Pens vs. Rangers game tonight so that should be a good preview for what might be the Eastern Conference championship this year.

More articles specifically for FiveforBoarding soon, I think I am going to write about who should win the Calder Memorial Trophy for Rookie of the year. Keep an eye out!

Over the last couple years, there as been an increase in the number of shootouts in professional hockey. Because of this, a new trend has begun to form amongst NHL players.

May I introduce you to: The SPIN-O-RAMA (yes, the capital letters were needed for major emphasis).

What is the Spin-O-Rama you ask? Only a phenomenally exciting technique/move used by the best players in the league to school goalies and get their team a win after overtime. Some Spin-O-Ramas were featured during the shootout elimination challenge during the all-star game and Evgeni Malkin successfully converted one against Carey Price last night. See that video here:

Spin-O-Ramas are thrilling to watch and are way more effective than you would imagine. Who knew spinning in a circle and shooting the puck at the last second could throw off a goalie so much? You just have to make sure progress continues forward during your spin (people who play NHL ’12 and have tried this move know just how difficult this can be). Here are some of my favorites from the last couple years.

Steven Stamkos at the All-star Game:

The other two teams with major 3rd period comeback wins on 1/31/12 were the Boston Bruins and the Pittsburgh Penguins. The black and yellow really seemed to be rocking the 3rd period last night!

The Bruins had a strong scoring streak near the end of the game to make them victorious against the Ottawa Senators. The Bruins started off strong with the first goal of the game (A power-play goal courtesy of Chara’s monster slapper from the blue line). The end of the 1st and the 2nd didn’t go as well for Boston. They were trailing 3-1 until the last minute of the 2nd when they started to make their comeback. Their last goal was scored with 12:51 left in the 3rd period to make the game 4-3 which ended up being the final.

Highlights from the Bruins game:

The Penguins game was equally exciting with Pittsburgh coming back from a 4-1 deficit in the 3rd period.

The game ended in a tie at 4-4. This tie was made when Center Evgeni Malkin scored the Penguins 4th goal with 0.6 seconds left in regulation. OT went scoreless and Malkin was the only one to score in the shootout to gain the Pittsburgh win. Many Toronto fans were very angry with the outcome of this game because of a re-called goal from the first two minutes of play. Officials said Lupul was penalized for goaltender interference- and I have to say, I did not see what the officials saw.

Check that out here: 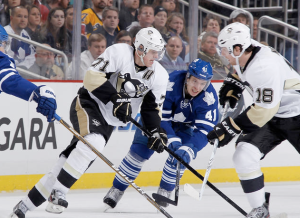 Do you think the Pens deserved that win against the Leafs? Is Malkin getting enough credit from the news and the NHL for what he is doing for Pittsburgh? Does anyone see the supposed goaltender interference?

Let me know in the comments!